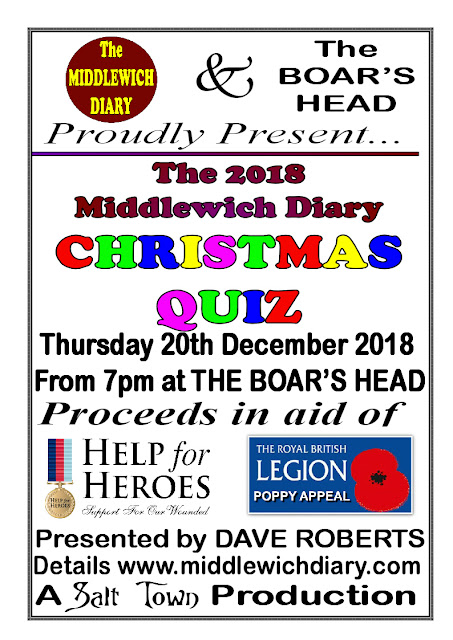 Many thanks to everyone who took part in this year's Middlewich Diary Christmas Quiz.

Sadly, we didn't make an enormous amount of money, but this was largely due to administrative difficulties owing to illness.

However, we have donated £20 to the Royal British Legion Poppy Appeal (including a donation of £5) and £20 to Help for Heroes

Original text of this Diary entry:

The 2018 Middlewich Diary Christmas Quiz will be held at the Boar's Head on Thursday 20th December. Proceedings begin at 7pm with  Christmas music to get you - cliche alert - 'in the Christmas spirit', and the Quiz itself  will follow somewhere around 8.30 pm - the traditional Boar's Head Quiz time! 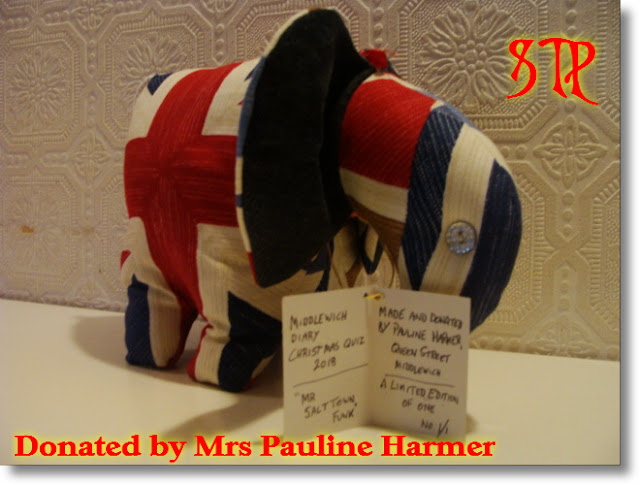 Prize made and donated by Mrs Pauline Harmer of Queen Street, Middlewich. This is a limited edition of 1. He's an EleFunk and is sporting patriotic red white and blue colours. He's been created especially as a prize for our Christmas Quiz. His full name is 'Mr Salt Town Funk' and he's unique! 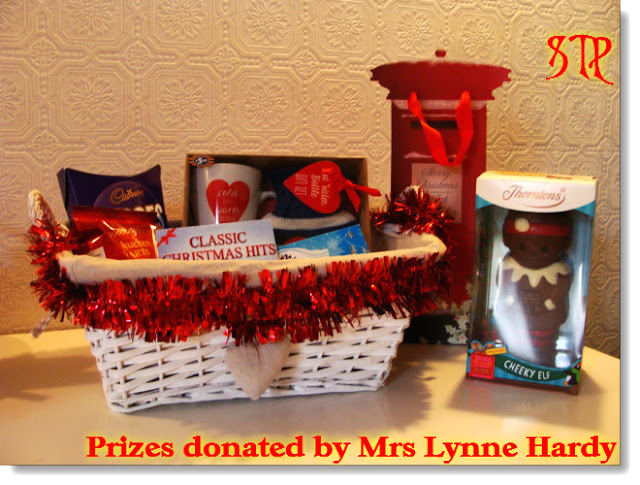 Mrs Lynne Hardy, whose son Luke was in the Parachute Regiment. served three tours in Afghanistan, was military advisor on the feature film Kajaki and has been an Ambassador for Help for Heroes, has donated these prizes.

Bottle of Cava, donated by The Boars Head

Sadly our quiz organiser, Peter Cox, has been ill in recent weeks and has not been able to perform his usual task of gathering prizes and helping publicise the quiz.
Get well soon, Peter!

If you'd like to donate a prize, please bring it along to the Boar's Head tonight. Your donation will be gratefully received and recorded here in the Middlewich Diary.


Remember that EVERY penny collected tonight will go towards the two charities, Help for Heroes and the British Legion Poppy Appeal. The proceeds will be split 50-50.

The rounds for the quiz will  be:

Christmas, and the run-up to Christmas, with the annual switch-on of the town centre Christmas lights, has become one of the town's most popular  happenings -  up there with the FAB Festival and the Rose Fete. And the Middlewich Diary has chronicled what's been happening in recent years (well, some of it at least). So you'll find all the answers here in these very pages...

Call My Bluff, based on the long-running TV show,  has for many years been one of our most popular quiz rounds. It gives you a chance to pit your wits against Mr Roberts' ever more enfeebled brain, as he gives you three definitions of obscure words, one of which is true, and two of which he's made up, the silly bugger. And because it's Christmas, all the words this time round have a festive feel to them.

No Middlewich Diary Quiz is complete without music, and here in all its cheesy glory, is the kind of Christmas music which makes pretentious musical pillocks despair. You just know that one of the answers is going to be Fairytale Of New York, so there's one point, right there,  before we even start... And there'll be loads more Christmas music throughout the evening, whether you like it or not. Your chance to start grumbling about all the songs being 'before your time'. A lot of them are before our time too...

4: CHRISTMAS NIGHT WITH THE STARS

Recordings of famous entertainers talking, singing and joking about Christmas. Loosely based on that old-time BBC TV favourite Christmas Night With The Stars but with a few more recent stars also thrown in. And so they should be.

Pictures of well-known people at Christmas. One of them is bound to be Father Christmas. So there's another point, completely free of charge. Don't say we never give you anything.

Teams can consist of as many people as you like, but we recommend about four.

The quizmaster's decision is final, even when he's wrong. And he usually is.

We're always on the look-out for more prizes.

If we find we have more prizes than needed for the quiz, a draw will be held for the extra ones.

We're after the usual quiz-type stuff; bottles of wine, boxes of chocs, all of that stuff.

You can get in touch with us through our usual Facebook Groups,  email us at


Alternatively, just bring your prizes along to the quiz!

Thank you for your time!