THE BEST OF MIDDLEWICH: MIDDLEWICH PHOTOGRAPHERS and THE 21st CENTURY TECHNOLOGY & CAMERA GROUP

Almost certainly the longest title yet for a Middlewich Diary entry!
We've put together the original Middlewich Photographers Group and the 21st Century Technology & Camera Group in this entry because, in this day and age, the two go hand in glove and many, if not all, members of Middlewich Photographers are also members of the new group..
Photography has taken to computer technology like a duck to water and, using modern computer software, many ordinary photographs can be made into works of art without the need to resort to the traditional darkroom. If you've just switched to digital from film photography, or recently upgraded your digital camera, you want to learn about the techniques used and the tremendous possibilities brought about by new ways of working, this group could be just the thing for you.
Meetings of the 21st Century Group are held at Willowmere in East Road and feature talks by group members and guest speakers, as well as opportunities to exchange information and ask questions.
Regular outings and photo-shoots are also held and the group also holds social evenings at the White Bear.
As you may have noticed, many of the modern-day photographs on the Middlewich Diary come from members of these groups.
We're always on the look out for photographs, old and new, taken in and around Middlewich, and we always acknowledge our sources and provide links to Facebook Pages, websites etc. when requested.

YOUR LOCAL CHESHIRE TECHNOLOGY GROUP NEEDS YOU!!!
In 2015 the 21st Century Technology & Camera Group will be looking for many more TEENAGERS to join CHESHIRE'S quickly growing Technology and Camera group.We would like you to share your own mobile phone and tablet knowledge / experience with members, who in return can offer you many years photography work and business experience, with guidance on how to gain places of work in the vastly expanding commercial MEDIA work places in the UK.

We intend to spend a considerable amount of the GRANT monies recently provided by Middlewich Town Council and Cheshire East, by providing a MEMBER TRAINING PC Work Station, with a very large TV monitor, fitted with the latest PHOTO POST PROCESSING SOFTWARE.

This will ensure our younger members can gain FREE...ONE to ONE personal training by experts and existing members with years of real experience, in using this type of software, in a real workplace environment.

What better for YOU in today's competition for jobs, to have on your own C.V. a note to say you already belong to a local technology and camera group, have worked with people in the group who have years of media experience, and to be able to show photos of your work, completed whilst being a group member.

INTERESTED to find out more? call 07971 136360 & speak to Cliff, or go to our on-line FACEBOOK site, and join the group today, if this is for YOU?
or SHARE info with friends who may wish to know more

Have digital camera? Want to learn how to take real photos............not just snaps.Check out the above Flyer and make your middle Wednesday of each month, one for you to find out more about photography, with like minded friends of all ages.

Here's news of a new book on Middlewich.

The book,Middlewich Hospitality, written by Ken Kingston and published by the Local History Group of Middlewich U3A. comprises


Copies are available from Mike Walton at mike-walton@hotmail.co.uk

With thanks to Joy Leathwood

Posted by SALT TOWN PRODUCTIONS at Monday, March 23, 2015 No comments: Links to this post 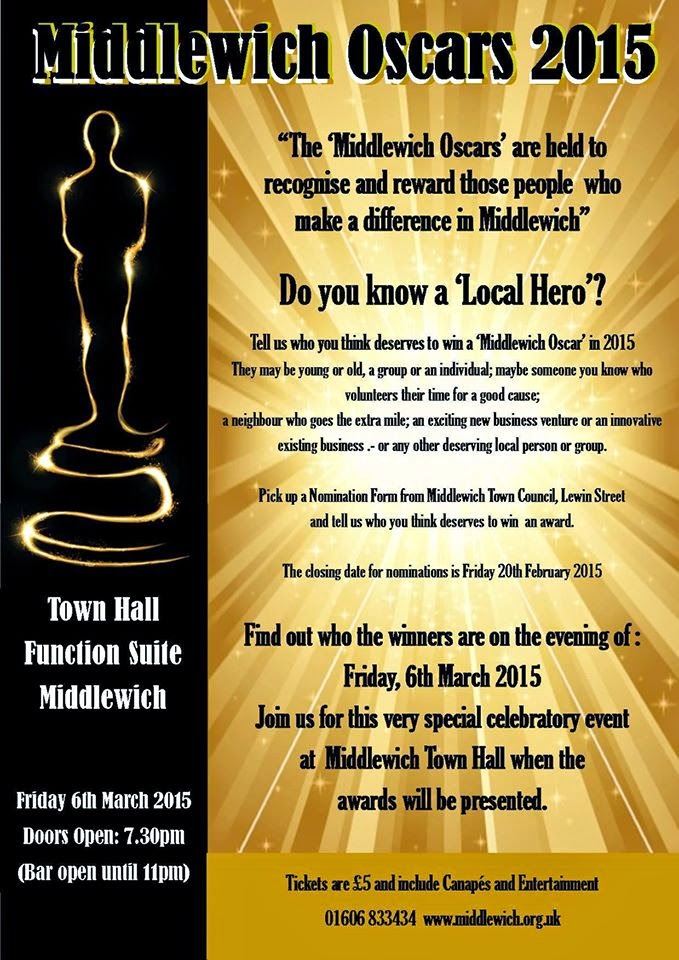 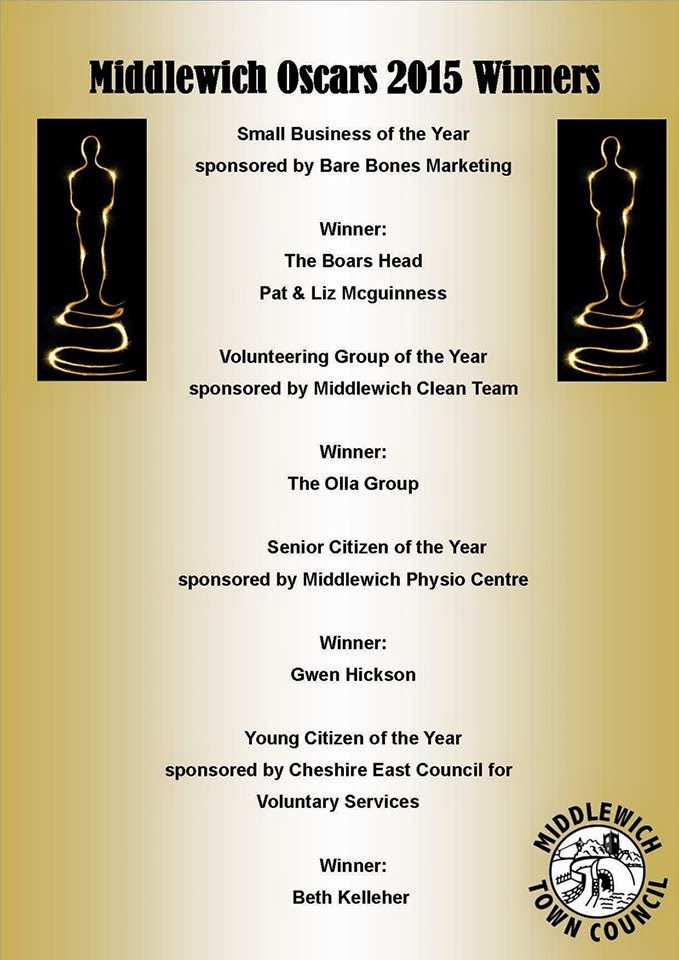 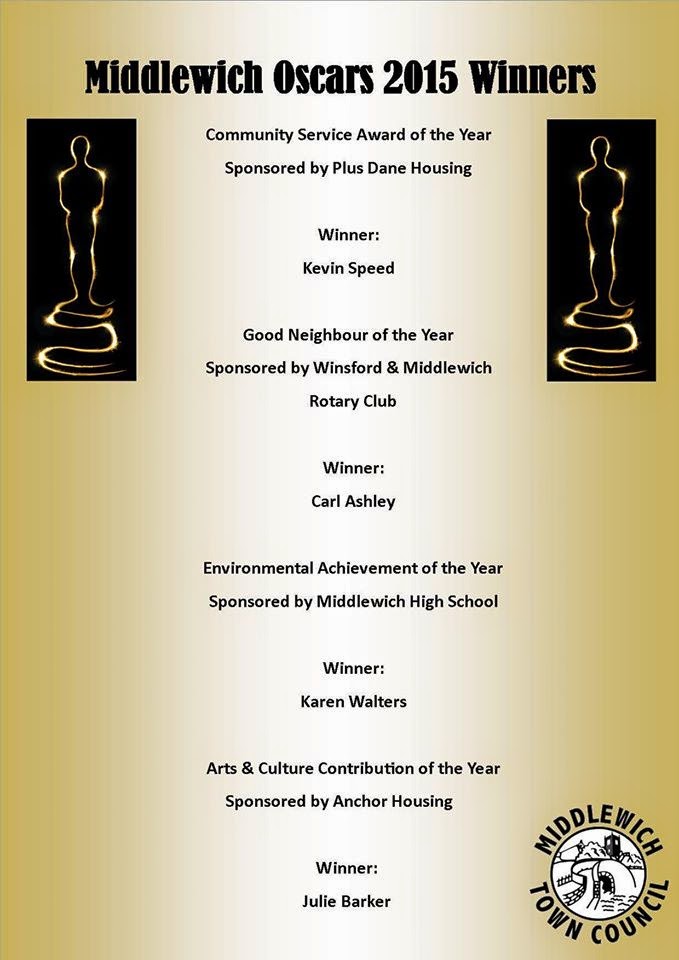 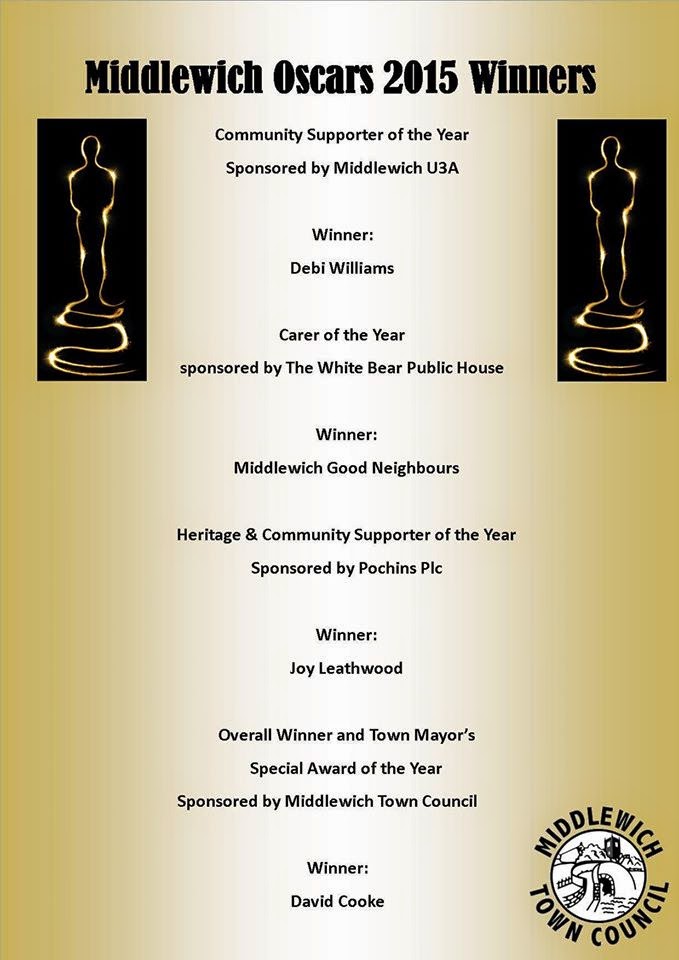 Congratulations to
all the winners!

with thanks to NICCI ANTHONEY
Posted by SALT TOWN PRODUCTIONS at Friday, March 06, 2015 1 comment: Links to this post

We're grateful to our King Street correspondent Bill Eaton for this photo of a class at St Mary's School in New King Street halfway through the last century.
Bill tells us that this historic picture contains two of our regular Middlewich Diary correspondents, Geraldine Williams and Maureen Condra.
Bill estimates the date of this photo as around '1950' and we're, as always, open to correction on that. We'd also like to pinpoint Geraldine and Maureen and put names to other faces in the picture.

Not surprisingly, this memento of schooldays long ago brought an immediate response. Also not surprisingly our first correspondents were Maureen Condra and Geraldine Williams - Ed.

Maureen I am on the second row, 2nd from the right, with the white ribbon in my hair. Some of the other pupils are Margaret Pace, Mary Glenn, John Maddock and Tony Duffy.

Geraldine I'm the tallest one on the back row with Deirdre Costello* to the left of me. It's a brill pic and lots of other names come flooding back - Parry, Maddock, Johnson, Lambert, Fahey, Cannon, Duffy. This is the last school photo before deidre and I were siphoned off to attend Sir John Deane's Grammar School, Northwich.

Maureen Condra No. They all went to Council School.

Posted by SALT TOWN PRODUCTIONS at Wednesday, March 04, 2015 No comments: Links to this post