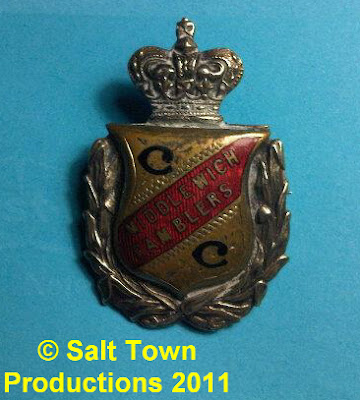 By Dave Roberts
An enamelled lapel badge from the original 'Middlewich Ramblers Cycling Club' reformed in the 1920s. This badge was passed on to me by my father, Arthur Roberts, who was one of the original members of the 1920s club, in around 1968 and, miraculously, the note he wrote on a little scrap of paper has survived. 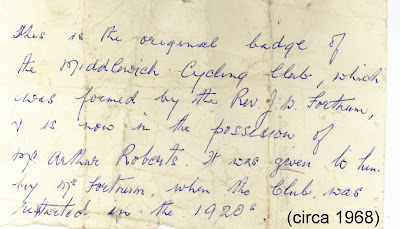 It reads:' This is the original badge of the Middlewich Cycling Club, which was formed by the Rev J W Fortnum* and is now in the possession of Mr Arthur Roberts. It was given to him by Mr Fortnum when the club was re-started in the 1920s.'

When this article was first posted, I was under the impression that this was the badge of the Middlewich Ramblers CC from the 1920s, but some astute observations on Facebook from Geraldine Williams have helped me revise my opinion (see Facebook feedback, below). Geraldine's theory, coupled with a vague recollection of seeing a simpler, round enamelled Middlewich Ramblers badge (which I may still have somewhere - I hope so*) was so convincing that I've altered this posting accordingly.
* And so it indeed proved! The other badge came to light over a year later, and can be seen here
Now we need to know when the original club was founded and disbanded and when precisely in the 1920s the new club came into being.

There is an obviously apocryphal story that the 'Middlewich Ramblers' was originally going to be a football club but, after the badges had already been made, it was decided to turn the club into a cycling club to avoid confusion with Sandbach Ramblers FC.
All obvious nonsense, of course - the chances of confusion with the Sandbach Club would be very slight and, in any case, as we can see from this surviving badge, the letters 'CC' (for 'cycling club') were included in the design from the beginning.

The Ramblers held meetings in the outbuildings at the rear of the White Bear. When the Northwich by-pass, with its dedicated cycle lanes, was completed in the 1930s it was a common practice to hold Saturday morning races from Middlewich to Chester.

Geraldine Williams It looks like 're-started' Dave (after studying your Father's handwriting) which puts a different slant on it and could mean that Mr Fortnum was passing on some historical memorabilia. Colin Brimelow was also a member of the Ramblers - as were my aunt and uncle, Kathleen and Albert Yoxall, despite Albert being an amputee. When their son, John, was born in 1946 they were able to continue their hobby by having a sidecar fitted to a tandem cycle.

Dave Roberts  Interesting. That would explain why Dad used the words 'original badge of the Middlewich Cycling Club', indicating that the club had been in existence some years before the 1920s. Certainly the badge itself has a solid Victorian or Edwardian feel to it. I can't find any mention of cycling clubs in Allan Earl's books.