Here's an interesting piece of Middlewich history in the form of a letterhead from the Middlewich Salt Co Ltd (incorporating Verdin Cooke & Co Ltd). The company was later to become part of Cerebos and had one of the earliest vacuum salt making plants in the country, as well as traditional open pan works. The letterhead itself repays closer inspection. From it we learn that the company's telephone number was Middlewich 117 (2 lines) and their telegraphic address was 'Witch, Middlewich'. Their registered office was at Willesden, London and this remained the case right up until the take-over by RHM Foods in the late 1960s.
The trade-marks are particularly interesting. For some reason stags have always been associated with salt (perhaps a simple matter of alliteration) and cruet sets containing stag salt and pepper shakers remain popular to this day.
Cerebos table salt, of course, still proudly displays the Royal coat of arms on its packaging: 'By Appointment To Her Majesty The Queen, suppliers of table salt and pepper, Cerebos, London'. 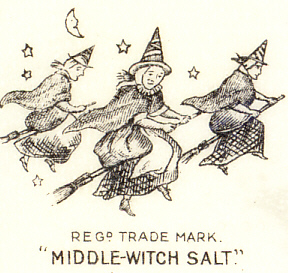 The other trade mark is based  on that old association which we've mentioned before between Middlewich and witches, and even includes a pun on the town's name in its 'Middle-Witch' brand.
This  heading comes from a letter of reference which my Dad, Arthur, obtained from the company in 1946 in order to get a new job at Benger's in Holmes Chapel.
This proved to be a costly mistake as he returned to his old job shortly afterwards having lost part of his pension entitlement.

UPDATE (28th October 2016)
Those three witches, of course, are too good, and too iconic, to be forgotten. This modest account of a long-forgotten salt company has, since the very start of the Middlewich Diary, been our most popular entry. So we've decided that an updated representation of them would be ideal to celebrate Halloween. Here's our special Middlewich Diary Masthead for October 2016.